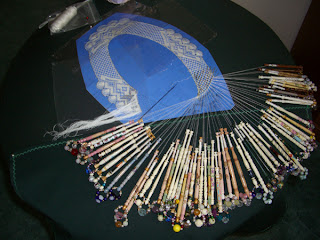 This piece of lace was on my pillow and I was working on it when I got a phone call to say my dear friend Dorothy had died at the wheel of her car...that was 6 years ago ........... I didnt touch this lace again until just before this Christmas 2006........ I just couldn't face it then.
However I am now pleased to say that it is in the process of being finished and will be called Dorothys Torchon mat.....in memory of her, a wonderful lady always laughing and smiling.
Posted by Art by JoyMac at 12:39 PM 1 comment:

Some of my Shuttles 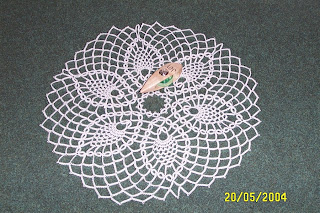 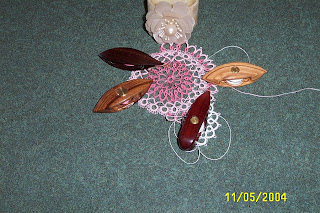 The photo at the bottom shows just a few of my tatting shuttles.......three of these were made by Edward Clark in England and are the cream of shuttles...going from top right around...the fourth one is also a beautiful shuttle from the U.S.A. and made by another very talented shuttle maker David Reed Smith...the mat underneath them is not finished yet but is from a Japanese pattern being made in size 50 cotton

As you may realise I got addicted to collecting shuttle too !
The White Pineapple doily was made from a pattern by Teri Dusenberry of the U.S.A. this lady is an extremely talented designer and a really nice person who is passionate about her tatting and designing.....I only hope that I have done her justice in tatting this doily...this one is a real favourite so thanks Teri for making the pattern available.
Sitting on top of it is another one of my shuttles the GR8 made by the Shuttle Brothers in the U.S.A 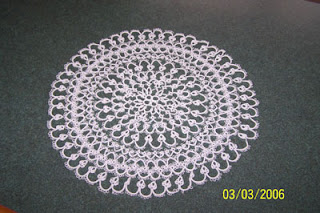 This is a large white doily tatted in size 20 cotton it has lots of picots and is one of my favourites...but quite easy to do....I have tatted this one a few times now
Posted by Art by JoyMac at 8:26 AM 1 comment: 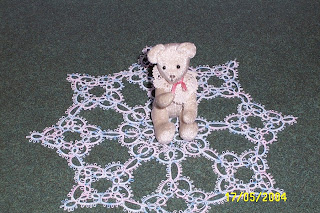 This is a tatted doily and my tiny teddy Jamie, he sits on my bobbin lace pillow...making sure that I dont make mistakes!!!!!.